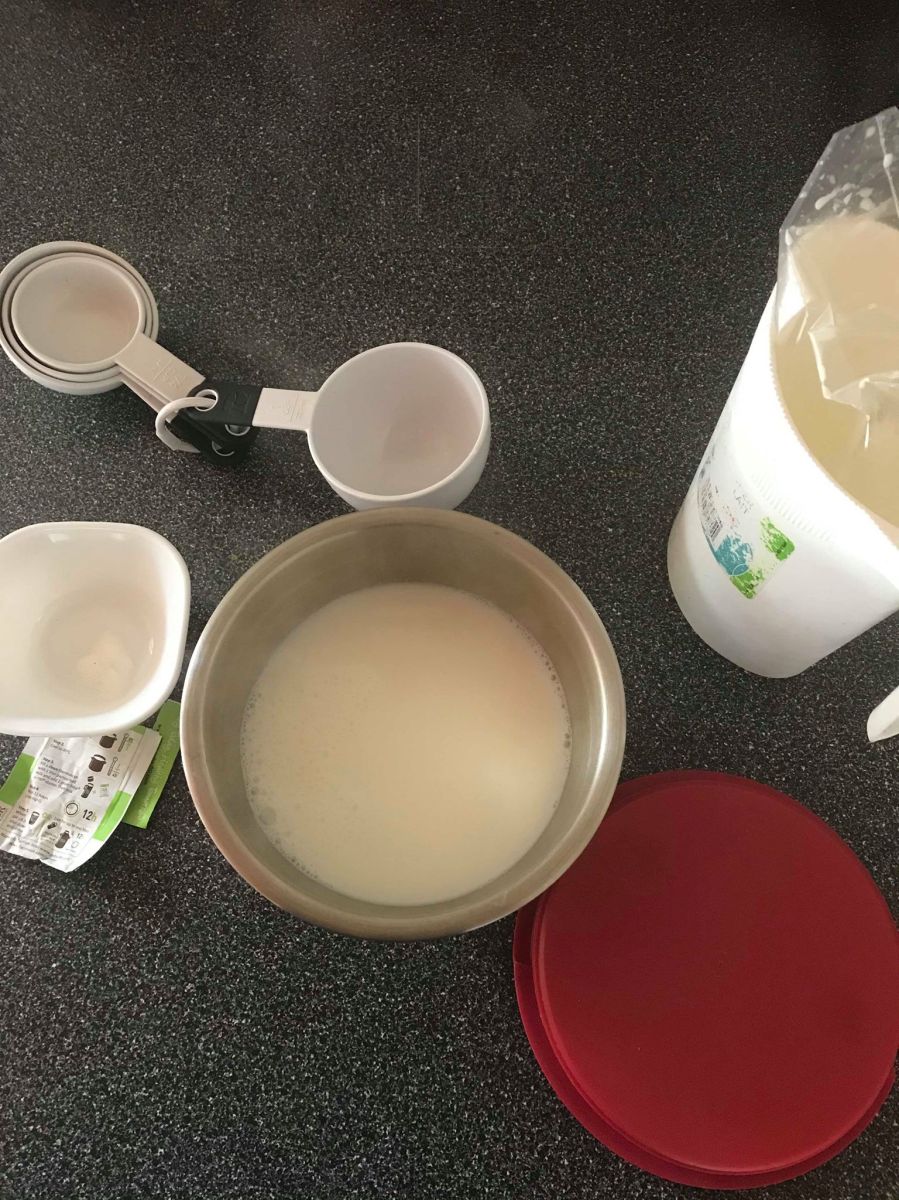 Growing up in an Indian household I would always make homemade yoghurt with my Grandma, and I still do to this day. When I started working with Western Heads East (WHE) and learned about their yoghurt making process, I found many similarities in comparison to how I have been making yoghurt thus far. While yoghurt making is not a hard process, I thought I would share how I made yoghurt using Fiti sachets! The full recipe can be found at the end.

To start the yoghurt making process, milk must first be purified. I poured 1L of regular 2% milk into a pot, which I warmed on my stovetop for 15 minutes. I kept the heat on medium-low but it is important to adjust accordingly to ensure the milk is at 85°C for the 15 minutes. A thermometer can be used to keep checking on the temperature. This recipe can be altered though if you would like to change the quantity of yoghurt that you want to produce. After heating the milk for 15 minutes, at which point it will be boiling slightly, it is important to close the stovetop and allow the milk to cool to 45°C. In comparison to how I made yoghurt beforehand, I never used to use a thermometer. I would simply wait until the milk has been on the stove for a while and starts to boil slightly and then let it just cool down for a bit. So this first step was similar to me, except for the usage of the thermometer.

After cooling the milk and pouring it into a container, I poured some additional cold milk from the fridge into the container. Since I was making half the quantity of the standard 1L of yoghurt, I poured a little over 2 cups of milk in. After pouring, the milk should feel warm to touch (not too hot). At this point I also put in half of the starter culture from the Fiti sachet (so 0.5 gram of starter culture with probiotic GR-1). In comparison to how I made yoghurt before, instead of measuring, I usually used one entire bag of milk to boil and then poured another cold bag of milk into the container to follow. Instead of using starter culture, my grandma and I would mix in a tablespoon of the last batch of yoghurt we had on hand. Both ways work and are feasible.

Last but not least is the waiting game! I wrapped up my container with a small towel and put the container in a small warm corner of my kitchen. Usually in colder winters I tend to wrap the container in thicker shawls. After the 12 hours are up, you can put the container in your fridge to chill and enjoy! Before using the sachets, I usually only used to wait 3 hours, in comparison to the 12 hours, before I put the yoghurt in the fridge. The main difference I saw is that the longer you wait, the thicker the yoghurt is and it is also a bit more sour. Fruits or honey can be added in this regard to further flavour the yoghurt. I hope this helped, please share if you have made yoghurt at home as well doing this period of staying at home!

– To make make approximately 1L of yogurt, you will need a pot, small mixing bowl, a thermometer, a stirring spoon and 1L of milk

– Firstly, you should start by washing your hands and sanitizing the materials and equipment such as the pot, spoon and mixing bowl with hot water and soap

– Next, add 3 cups of water to the pot and bring to a boil

– Place 1L of milk in a bowl over the boiling water

– Once reaching 85 degrees celcius, keep at a consistent heat level for 10 minutes

– Afterwards, turn off the heat and remove the bowl of milk from the boiling water

– In a new pot, add COLD water and place the bowl of milk in to cool

– Stir and monitor the temperature until reaching 45 degrees celsius

– Once the temperature is obtained, remove the bowl from the water add stir in the fiti sachet into the milk

– Wash and sanitize all materials and equipment with soap and water

– After 12 hours, store the milk in the fridge

Western Heads East is a collaboration between Western University in London, Canada, and African partners using probiotic food to contribute to health and sustainable development. Largely through probiotic yoghurt social enterprises, the program is established in underserviced areas of Sub-Saharan Africa to address HIV/AIDS, health, empowerment of women, and economic development.
For more information, visit www.westernheadseast.ca